Nice to get back to the lab again, what a different world!

I met with Lukas one more time who helped me get started in putting together a small army of synchronized lighting circuits that we will be using to animate the radio signals as they are received. 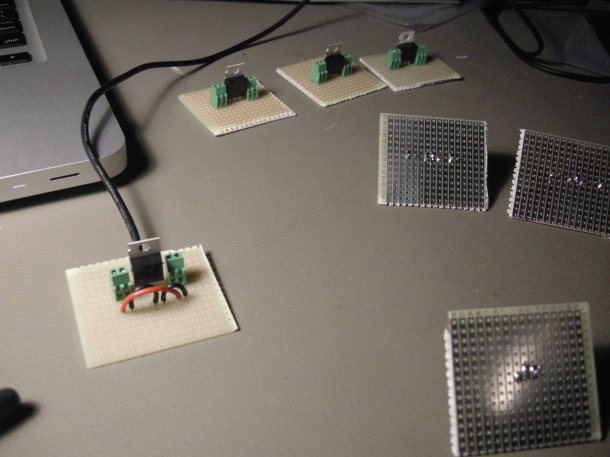 It is an amazingly simple circuit to put together for something that does such a fantastic thing! The secret ingredient would be the TIP 31, that basically works the magic that sync’s up the audio with the LED’s. The LED’s and battery packs I ordered from a site called Super Bright LED’s, which has a pretty great selection.

Lukas and I had a chance to test the lights out after a site visit to Charlottetown where it was apparent that the lights needed to be much brighter due to the steep competition with street lights in the park etc. It turns out that the diffusion of the lights using the translucent corrugated plastic captured the light beautifully.

It’s been a bit of a tease though only really having the room to test one bit at a time, and not the whole set up, which is going to be a bit of a marathon of an install with only access to the site the morning of the event. I suppose we will see how much it pays to be organized!